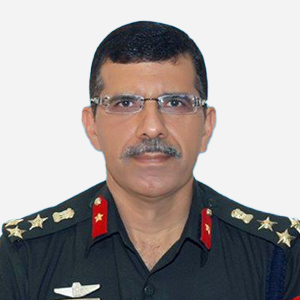 BiographyBrig Sandeep Chaudhary, VSM** (VSM Bar) is an alumnus of the prestigious Indian Military Academy, Dehradun and was commissioned into Corps of EME on 17 Dec 1989.

The officer has a brilliant career profile spanning 32 years, having been the Best Student in the two prestigious courses- Technical Staff College & Higher Defence Management Course. He has the distinction of being the first Director (Vigilance) at Army Headquarters. He has had a multitude of challenging appointments in Command and Staff domains to include Command of a Unit in Intense Counter Insurgency Area in North East as a Colonel, as also command of the highest Engineering Support Unit - a Base Workshop in the Northern Theatre as a Brigadier. The officer has served at the Career Management Branch of Indian Army-Military Secretary Branch, as also been Colonel Q (Operations) of a Command Headquarters. The officer has represented the country twice abroad, once for a prestigious course at Israel and on a UN Mission at Ethopia - Eriteria. He is now Commandant of the only R&D establishment of the Indian Army called Simulator Development Division excelling in developing Simulators & Products in niche technology domains of Artificial Intelligence, VR/AR & Robotics. The first time nation showcased Swarm of Drones event on Army Day 2021, was under aegis of Simulator Development Division.

A very keen sportsman, he has excelled in Squash for the Indian Army.